Although our catchment has been heavily impacted by human activities, is still retains a range of natural treasures that we all have a responsibility to care for. In the Kopuatai peat dome, we have a globally significant wetland, while what we do in our catchment affects the world-renowned shore-bird feeding grounds in the Firth of Thames into which our river flows.

Historically, the floodplain forests of the Hauraki plains attracted huge flocks of kereru and kaka when the kahikatea trees were in full fruit. The Piako is home to some of the last remnants of these ancestral forests making us uniquely placed to recapture the former glory of this almost completely vanished ecosystem.

We are also blessed with extensive areas of native forest in the hills surrounding our catchment – Pukemokemoke, Maungakawa and Te Miro. Members of our community are working hard to protect these few remaining tracts of in-tact forest from pest plants and animals.

The future is bright for native plants and animals in the Piako. We have greatly benefited from broader conservation efforts in the Waikato, with nesting pairs of iconic birds like tui rapidly increasing. Kaka are noisy winter visitors, with Morrinsville being a favourite hangout. The native long-tailed bat also uses the remnant forests along our waterways to move through the landscape. We perhaps don’t realise the range of natural treasures we have. If we work together, we have a great opportunity to make our natural treasures a growing source of pride for our community and to preserve these treasures for generations to come.

The Piako River is a lowland river system that drains into the Firth of Thames on the North Island of New Zealand. Together with the Waihou River, it is one of the two main rivers systems which drains the Hauraki Plains. It is the dominant river system in the Matamata-Piako District, and on its journey it passes through the towns of Morrinsville and Ngatea.

The Piako River has an annual mean flow of 17 cubic metres per second (600 cu ft/s) (at Paeroa-Tahuna Road), with a total catchment area of approximately 1,440 square kilometres (560 sq mi). The river system is approximately 100 kilometres (62 mi) long, aligned in a north-south direction and occupies much of the central and western Hauraki Plains (or more broadly, the Thames Valley), extending from Hinuera in the south before discharging into the Firth of Thames in the north, five kilometres west of Thames.

The second stem is the Waitoa River, which starts near Piarere. The Waitoa River catchment drains the Hinuera Flats and broad southern Hauraki Plains, before converging with the Piako River in the large wetland known as the Kopuatai Peat Dome, northeast of Tahuna. The Upper Piako River catchment also drains the eastern aspects of the Hapuakohe Range through small tributaries.

The Piako river catchment is one of the most intensive agricultural districts in New Zealand. This has had, and continues to have, intense impacts on water quality in the streams and rivers of the catchment. However, there is some evidence that water quality indicators are improving.

A summary of water quality monitoring data is provided below.

- Water quality is monitored at 6 sites.

- Ecological data (invertebrates living on the stream bottom) are collected from 6 sites. The diversity and types of invertebrates     present are used as indicators of aquatic ecosystem health.

- Both water and ecological data are collected at two sites.

- For most sites there is no clear trend for increases or decreases in condition.

- Almost all sites were in the bottom 50% of comparable sites for E. coli, turbidity, total nitrogen and total phosphorous.

-However, total phosphorous is generally decreasing (i.e. improving) for all but one site.

-Total nitrogen is decreasing (improving) for 3 sites, increasing in 1 site and showing no clear trend at two sites.

-No trend data are currently available for E. coli

A summary on monitoring data for the Piako catchment is available on the Land Air and Water Aotearoa (LAWA) website:
https://www.lawa.org.nz/explore-data/waikato-region/river-quality/piako-river/

The Piako River contributes around 25% of the water flowing from the Hauraki plains into the Firth of Thames. So what we do in our catchment has a big impact on the marine environment too.

Of these species 14 are native, including both native eel species (longfin and shortfin), banded and giant kokopu and several species of bullies (red-finned and Cranston’s).

The black mudfish is worthy of a special mention, since the Piako is one of its historical strongholds. It’s a hardy battler that can survive waterways that dry out for part of the year.

The major exotic species are the bullhead catfish, goldfish and gambusia (mosquito fish) which all thrive in the low-oxygen, sediment laden waters of the lower reaches of the Piako and in drainage canals.

Gambusia is guilty of false advertising as it is more likely to eat the fry and juveniles of native fish species than mosquitos!
The vast majority of native fish records in the freshwater fish database date back to the 1990’s or earlier, so it is unclear what the current state of native fish populations is.

Although the Piako we see now is a peaceful landscape most notable for the leisurely grazing of dairy cows, it hasn’t always been this way. The catchment has been involved in some of the most dramatic events in New Zealand’s geological history, and these events continue to shape the land and soils on which our lives are based.

- Piako catchment comprises the western part of the Hauraki plains.

- The Hauraki plains are formed in the Hauraki Rift, a continental rift filled with sediments of either volcanic or marine origins.

- Hauraki plains are bound to the east by extinct volcanos of Coromandel range, Kaimais and Mamaku plateau.

- To the west, the plains are bordered by basement sedimentary rocks of the Hapuakoe and Pakaroa ranges.

- The Waikato river flowed through the Hauraki plains (via the “Hinuera gap”) for up to 300,000 years. Thus, much of the sediment on which the plains sit originally comes from gravel sand and mud transported from the Taupo volcanic zone.

- The Waikato adopted its present course following a huge eruption at Lake Taupo (15 times bigger than the famous eruption in 1200 A.D.), which eventually caused a debris flood covering the Hauraki plains in sediments up to 25m deep and blocking the Hinuera gap.

- Following this sediment deposition in the Hauraki plains was primarily from the Waihou, Waitoa and Piako catchments.

- Between Waitoa village and the Firth of Thames, the plains are only a few metres above sea level. This has led to impeded drainage contributing to widespread peat formation throughout the plains. The most striking example of this is the Kopuatai peat dome – a world
heritage wetland conservation site.

- The deep volcanic settlements of the plains mean that groundwater flows make a major contribution to river discharge, especially outside major rainfall events.

- The varied geology of the Piako catchment lead to a wide variety of soils.

- To the west we have clays derived from sedimentary rocks.

- Peaty soils predominate in the west (around Eureka) and north (from Kopuatai peat dome and around Ngatea).

- In the Waitoa sub-catchment, which forms the eastern side of the Piako catchment, a range of poorly-drained loams predominates. The Waitoa catchment generally lacks peaty soils, except where it joins the Piako river at the southern end of Kopuatai peat dome. 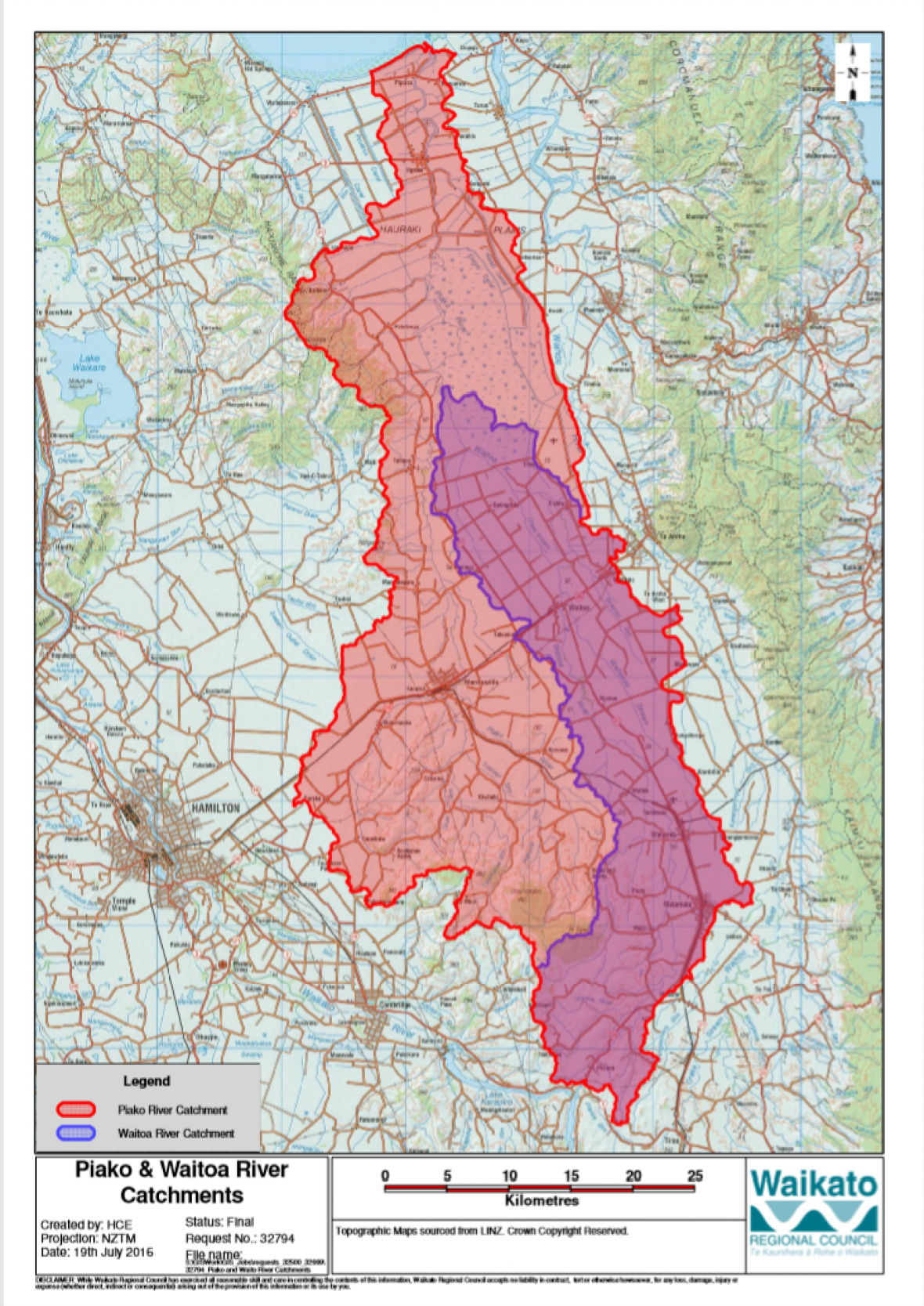